We're spending an extra week on Australia and New Zealand in our study of the Eastern Hemisphere, as that area is of high interest to the kids, and there are so many resources that we wanted to get through but haven't yet.  Here are some of the books we are using either to substitute in or supplement Sonlight Core 5.

, by Colin Thiele.  Becky over at Farm School recommended this title to me, and we are using it as a read-aloud instead of Island of the Blue Dolphins 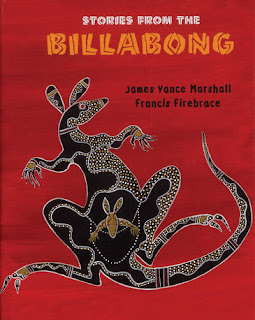 Stories from the Billabong

"Koala" from Magical Tales from Many Lands

, retold by Margaret Mayo and illustrated by Jane Ray.  Other countries represented in this title include China, Russia, India, Peru, France, the Caribbean, Scotland,  South Africa, Japan, and more.

Are We There Yet? A Journey around Australia

, by Alison Lester.  A picture book my younger two are enjoying, with a look at many different places around the smallest continent.

, by Witi Ihimaera.  Jazz is having a bit of trouble "getting into" this book (its lyrical style is not his cup of tea), but I know we'll watch the movie (again) this week, anyway.  He's also reading The Boy Who Spoke Dog

, by Clay Morgan, which he seems to be enjoying.

, retold and illustrated by Joanna Troughton.  An amusing story about a bunch of animals that want to get to a land across the sea.

"The Dreamtime," an Aboriginal creation myth in The Illustrated Book of Myths

, retold by Neil Philip and illustrated by Nilesh Mistry.  A DK book with tales from many of the countries we'll be studying this year.

, with this story of a girl who lives with her Nana in a Maori village until her mother convinces her to move to the city for a time.

Book Sharing Monday is hosted by Canadian Home Learning.  Come share a title or two that you've enjoyed!
Posted by Christina at 2:53 PM

Thanks for learning about our country, New Zealand - Aotearoa. It's great to read your kids were keen to spend longer discovering more about Australia AND New Zealand! Kia ora, Maree

"We're spending an extra week on Australia and New Zealand in our study of the Eastern Hemisphere, as that area is of high interest to the kids"

If you had to ask me why as a former public school teacher I am so supportive of friends and family who homeschool, that comment is one of the defining reasons. I love the flexibility of being able to follow the children's interests and not worrying about the school year schedule.

We got the Billabong book a couple of weeks ago from the library and listened to Waltzing Matilda from our World Playground CD. :D The flexibility is nice isn't it?!

"It's a mighty small mind that cannot find room for a unicorn or two."
~Song of the Unicorn

Friends' blogs and other inspiring blogs I read

Flyte (Septimus Heap #2), by Angie Sage (JaneG., 11.5)
Beyond Good and Evil, by Friedrich Nietzsche (Jazz, 15)
The Marseille Caper, by Peter Mayle (me)
Remembering Wholeness, by Carol Tuttle (me)